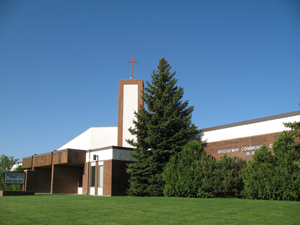 To give a brief history of where our roots lie, we begin the story back in 1933...

Frank Peters, a lay minister and city bookkeeper saw the need to provide spiritual nurture for many newcomers to the city, as well as the young women that came to Swift Current to work as domestics.

The Mennonite Brethren church was formed with just 26 members but the congregation quickly expanded to where in 1959 a new brick church building was constructed on 15th Avenue North East and Winnie Street.  The exclusive lay leadership ended and the congregation had their first salaried pastor and Bible teacher by the name of E.J. Lautermilch.

The congregation continued to grow and it was only 17 years later that the building became too small and the congregation decided to proceed with an ambitious building program on 13th Avenue North East.  In 1977, the congregation along with their pastor, Peter Nikkel, dedicated a new 600 seat sanctuary at 510 - 13th Ave NE .  By this time the church was no longer ethnic and the congregation adopted the name Bridgeway Community Church to help convey this message while still maintaining ties to the Canadian and North American Conferences of Mennonite Brethren Churches.

We are excited about being a part of the Swift Current community. It is a privilege for us to join with other churches and other organizations to make this a better place to live.  Some of the ways we are building a better community come through the MOPS program, our connection with CAMPS and Maverick schools, Salvation Army and other initiatives.  Bridgeway is a leading contributor in both time and personnel at West Bank Bible Camp and many hours are spent by our people at the MCC thrift stores in the city.

We believe that we are called to make a difference in our world so we are connected with MCC, Multiply and other international missions.

Above all else, we want to invite people to experience the transforming power of Jesus in their lives. We believe that Jesus makes all the difference. Come join us and encounter God.